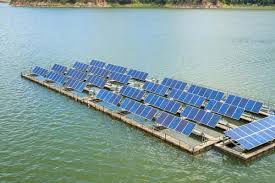 SCCL plans 500 MW floating solar power plant
(courtesy : official face book page of SECL)
After diversifying into thermal and solar (land-based) power generation in addition to its core
business area of coal mining, the public sector Singareni Collieries Company Ltd (SCCL) has
now plans to enter the floating solar power generation with more and more reservoirs holding
water throughout the year becoming available in the State.
After getting a study conducted by the Telangana State Renewable Energy Development
Corporation (TSREDC) on the possibility of floating solar plants in the State, the company
management has decided to go far by establishing 500 MW floating solar plant/s. The renewable
energy corporation officials made PowerPoint presentation to Chairman and Managing Director
of SCCL N. Sridhar on their study and the possibility of floating solar plants in the State.
The possibilities of having the 500 MW plant at one place (reservoir) or at five places (5×100
MW) was discussed at the meeting, particularly in the reservoirs available in the erstwhile
Karimnagar and Warangal districts. Mr. Sridhar asked the TSREDC officials to prepare specific
proposals on the floating solar plants since they would not cause any problem to the water bodies
and water drawl from them
As part of its diversification, SCCL has already established 2×600 MW thermal power plant at
Pegadapalli in Mancherial district and a 10 MW solar power plant on the 50 acres land available
on the premises of the thermal plant. Besides, work on setting up solar plants in nine mining
areas of the company are also in different stages of progress. The company has plans to establish
a total of 220 MW land-based solar plants.
Mr. Sridhar stated that after finalisation of the detailed project report for the floating solar
plant/s, they would enter into power purchase agreement with the two power distribution
companies in the State before embarking upon setting up the floating solar plants.
Director (E&M) of SCCL S. Shankar, Managing Director of TSREDC N. Janaiah, Project
Director Ramakrishna and other others participated in the meeting held to discuss the floating
solar plants.