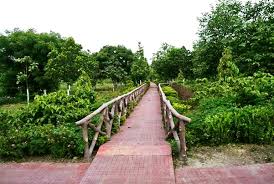 PIPARWAR OCP CONVERTS ITS RECLAIMED LAND INTO A HAVEN OF BIODIVERSITY

PIPARWAR OCP CONVERTS ITS
RECLAIMED LAND INTO A HAVEN OF
BIODIVERSITY (courtesy: official face book page of Coal India limite)
Piparwar OCP of Central Coalfields Ltd., the largest coal producing
mine in Jharkhand spread over 540 acres of land has reclaimed 272 acres
and has now developed 30 acres more of its backfilled and reclaimed
land into “Kayakalp Vatika” to reinstate biodiversity in the reclaimed
mining land. It has converted its backfilled and reclaimed land into lush
green forests with multiple species of medicinal plants, three small water
bodies and a vermicompost unit. The reclaimed land is being converted
into a rich bio-diverse area, with various habitats self sustaining each
other and developing into a new eco-system. The initiative was also
praised by CAG in its report.